Thinking of doing something different? Escape to one of the most beautiful white-painted villages in Andalusia, make a cultural visit to a big city or be amazed by the stalactites and stalagmites in the Caves of Nerja. We propose different plans for you to choose the one that best suits your circumstances.

One of the emblems of the town is the well known Chanquete boat, a loveable character in the legendary children’s TV programme ’Verano Azul‘, filmed in Nerja.

In Nerja you can also see the first cave paintings on the Iberian Peninsula, the Nerja Caves, where educational visits and comprehension games are carried out for children.

Located 16 kilometres away is Aquavelis, the water park in Torre del Mar, which will allow the little ones to enjoy all the rides whilst you have a nice dip in the water.

La Cueva del Tesoro is located at Rincón de la Victoria, which is one of only three caves of marine origin known in the world. It is also the only cave with these characteristics in Europe in which you can see cave paintings. 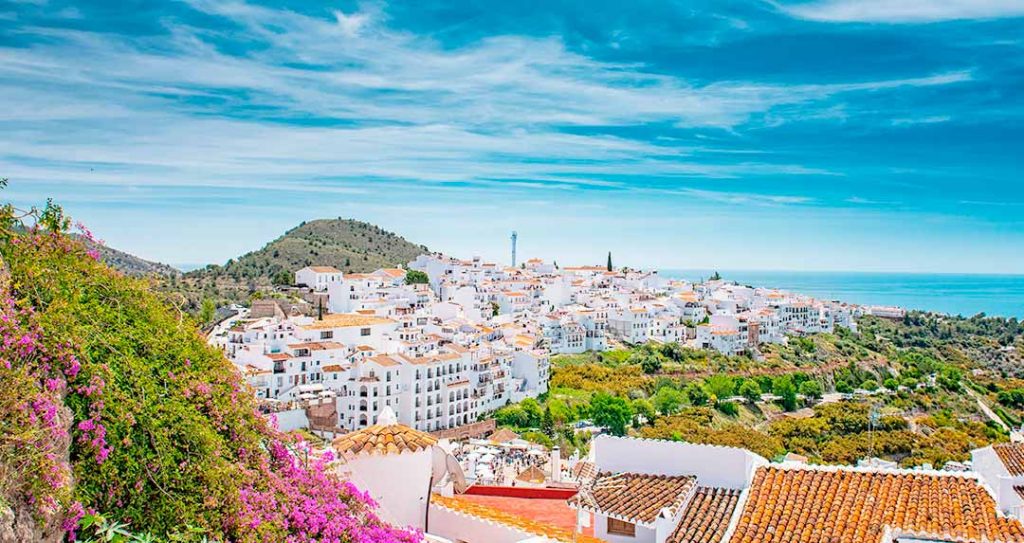 A town with an Arabic maze of white streets with grilles on the windows and bright colours in the flowerpots. Its architecture pays homage to its Arabic past with typical areas from the Granada of yesteryear, a mosaic of traditions which is reflected in its Festival of 3 Cultures. This festival brings together thousands of people every year in August marrying culture, cuisine, music and theatre.

In the heart of the town is a popular architectural ensemble of Arabic structure, one of the most untouched in the province, a network of narrow, whitewashed streets with unique charm.

This church is built on the old mosque; in fact the bell tower is the old minaret, transformed after the conquest in the 17th century.
Palace of the Counts of Frigiliana (18 min by car): Built at the end of the 16th century, it served as the ancestral home of the Manrique de Lara family, Frigiliana nobility. It is currently the only active molasses factory in Europe; therefore it is an important tourist attraction for the town.

Erected in the 9th century as a military fortress, it provides spectacular views over the ocean. The ‘Battle of the Rock’ forced the Christians to destroy it for fear of a Moorish rearmament.

This pretty town on the Granada coast is noted for its bay, currently an important centre of underwater activities. Its Marina del Este should be mentioned, with a capacity for 230 boats, it is a luxurious and beautiful complex on the Costa Tropical, between Nerja and Almuñecar.

This route among the vineyards of La Axarquía mixes coast and inland areas. Sayalonga, Cómpeta, Canillas de Albaida, Torrox, Nerja and Frigiliana are the white villages which make up this route departing from Algarrobo. In these municipalities you can see the wines of the region being made as well as tasting them.

From Rincón de la Victoria to Torre del Mar walkers visit the coast to then head inland. Due to its climate it is common to find an abundance of avocados and tropical fruit such as mango, papaya and custard apples being cultivated. Macharaviaya, Vélez-Málaga, Benamocarra, Iznate and Benamargosa are part of the villages which make up this rural route.

Five Mudejar-style villages which conserve the best of this architecture can be visited by covering just 40 kilometres. Departing from Arenas the villages of Árchez, Salares, Sedella and Canillas de Aceituno are visited.

The municipalities of Comares, Cútar, El Borge, Almáchar and Moclinejo make up the 62 kilometres of this route which begins at Totalán. Here vineyards flourish, whose fruit will be made into raisins on the dryers established on the knoll of the mountains. The raisins from this region were already famous in the Arabic period due to their exquisiteness.

This route of hillside villages departs from Riogordo. Colmenar, Alfarnate, Alfarnatejo, Periana, Alcaucín and Viñuela offer a unique landscape of mountains dominated by olive trees and pastureland. As well as taking part in sports in contact with nature, you can also enjoy excellent cured meats and great quality olive oil. 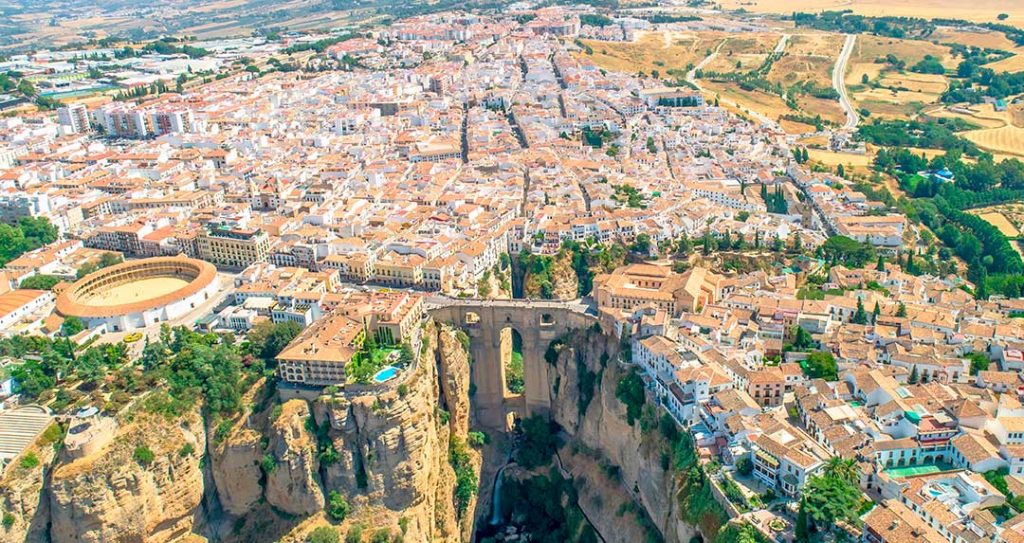 This route along the river Chillar is one of the most emblematic of the province due to its beauty and easy access amongst a beautiful landscape of ferns, pine trees and carob trees. It departs from Calle Picasso en Nerja (on the banks of the river) and takes approximately 8 hours to reach the waterfalls, although it can be done in shorter sections. The route is along the riverbed, therefore it is only recommended for summer.

As the capital of the Costa del Sol, Malaga is particularly famous for its sun, sea and sand but it also offers many cultural gems to those who know where to look. There are two fantastic museums here – the Picasso and the Thyssen– which you can spend hours wandering around in, entirely immersed in the sensational artwork. Also of interest to art-lovers or those seeking a more cultural Costa del Sol holiday are the house where Picasso was born, the citadel and theRoman theatre.

Granada is considered Andalucía’s trendiest and most youthful city which in itself makes it worth the hour long journey, but there is so much more to this fabulous city than just that. Granada also houses La Alhambra, a World Heritage site which is the most visited and most symbolic monument in all of Spain. The Albaicín and Sacromonte neighbourhoods fill the city with vibrant colour and charm, and the majestic peaks of the Sierra Nevada mountain range provides the perfect backdrop to this captivating city which offers a delightful twist on a classic Costa del Sol holiday.

Located in the province of Malaga is Antequera, which is considered the historic and artistic hub of the region. A visit to this historical town is like stepping back in time; there are burial mounds, Moorish castles, Gothic churches, Roman baths, Renaissance fountains and baroque bell towers. El Torcal is a unique natural beauty spot also located in the town, and its unusual limestone rock formations, moulded by the wind and rain are a must-see.

Considered one of the prettiest towns in all Andalucia, the mountain town of Ronda truly will take your breath away. Split in half by the spectacular Tajo gorge, ancient houses teeter precariously on the cliff top and offer dizzying views of the stunning landscape. As well as its natural beauty, Ronda has plenty of culture to offer too; the beautiful Plaza de Toros bullring and its museum provide an excellent insight into one of Spain’s most famous and controversial traditions.

Founded by the Romans, ancient Cordoba’s heritage is not hard to miss; its famous bridge over the Guadalquivir River is called El Puente Romano, but it’s not just the Romans who have contributed to this strikingly beautiful city.Cordoba was once the capital of the Moorish kingdom of El-Andalus, during the El-Andalus period, in which one of the most important monuments in Spain, the Mosque, was built. This is just one reason why its architecture is so outstandingly unique. Its old town is the second largest in Europe and is a labyrinth of winding, narrow streets, shady flower-filled courtyards and scenic squares that are perfect for enjoying a well-earned meal or drink.

To learn more about gastronomy, culture and many other things to see and do in Andalucia, check out all the information we offer in our blog.

Discover all our advantages

6 REASONS TO ENJOY YOUR HOLIDAYS WITH US

Quirón Prev.® and Cristal St.® help us to meet the strictest health standards. We have been awarded the Andalucía Segura® (Safe Andalucia) seal

Trained and protected staff, without losing our family-friendly atmosphere. Crowding will be avoided

Enjoy the pools as always. We just ask that you maintain social distancing

The best way to rest, in line with the highest disinfection and cleaning standards

Caring for you is our priority. We want you to enjoy worry-free holidays at all our hotels. This is why we’re adding a medical guarantee to your stay, at no extra cost to you and for all bookings made through our website or booking centre, to make sure that the following services are available if you need them:

If you have any additional queries, please call us on +34 951 568 560 or write to booking@oleeholidayrentals.com

*This policy represents insurance that is complementary (second layer) to the insurance or cover that the insured traveller may have; the said insurance covering the insured traveller shall be applicable in the first instance. All international travellers (foreign, non-resident), travelling to the Autonomous Region of Andalucia as a tourist by whatever means of transport, lodging in an officially recognised establishment with an irrefutable booking, during the stay thereof within the cover period of the insurance. This policy applies in case of Covid-19 during stays to be enjoyed up until 30/06/2022. 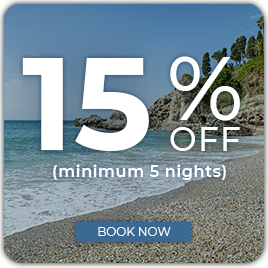